We began our morning with breakfast at Cat Eye Cafe, and highly enjoyed their cat-themed decor and delicious food. Then it was time to say goodbye to Bozeman and we got started on the long drive to Glacier. After a stop in Columbia Falls for groceries and Whitefish for lunch, we reached the cabin we were renting for our stay in northern Montana. The cabin was part of an original homestead, completely refurbished to make for a charming vacation home.

After settling in, we drove into Glacier National Park to get an early peek of where we’d be spending the most of our next several days. We stopped at McDonald Lodge to enjoy the view and visit the gift shop. Like we would discover in most of northern Montana, the shop was full of huckleberry-flavored treats. 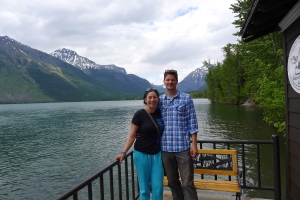 us at Lake McDonald

Since we were visiting early in the season, the famous Going-to-the-Sun Road wasn’t fully open yet. It would take several more weeks for crew to finish clearing the snow from the higher passes. We drove the 16 miles that was open, up to Avalanche Lake.

scenic view along the Going-to-the-Sun Road

On our way out of the park, we stopped to get information on boating permits for our two kayaks and talked to a friendly ranger about the various lakes within the park that would be good for kayaking. He confirmed that our choice of Upper Kintla Lake would be a good one, and we became even more excited for our first full day in the park.

We headed back to the cabin where Kurt grilled up a delicious meal of salmon and corn on the cob, paired with some local beers including the Great Northern Brewery’s Wild Huckleberry Wheat. The sky stayed light until 10:30 pm, as we were far north and near the western edge of the Mountain time zone. Our first night in our little cabin was cozy and peaceful.

“There’s a bison right outside the tent,” Kurt whispered to me as I slowly woke up around 6 am on our last morning in Yellowstone. Sure enough, I could hear its breathing and heavy shuffling footsteps just a few feet away. We could even smell it. We stayed quiet and still, and it moved on. However, a second bison was right behind him, and this one was much more agitated about our tent being on his turf. We could hear him huffing and grunting at us as a warning. “Would a bison ever charge a tent?” Kurt whispered. I shrugged, freaking out, but gestured to remain quiet. The huffs grew louder and angrier, and we could tell that the bison was directly next to the tent. After about 30 seconds (but felt much longer), it finally relented, realizing that the tent was not going to move. We heard his footsteps move away and breathed a huge sigh of relief. Kurt unzipped the top part of the tent door to check and see how far the bison had moved along. 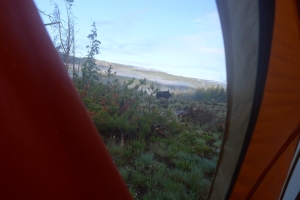 Once the bison had gotten further down the valley, we finally were able to move around and make noise. It was time to head back to the car, so we packed up camp, had an easy breakfast of oatmeal bars and jerky, then began our hike back to the trailhead. Luckily, this time when we reached the top of the ridge there were no bison in sight, so we were able to stay on the trail. Along the way, we saw some clear wolf tracks in the mud, fresh since the previous night’s rainstorm.

The return hike went much faster, as we didn’t run into any more bison herds. The only detour we needed to take was near the end of the hike, when a single bison had wandered close to the trail. At that point we had run into a day hiker from Cody, so we followed him when he took a wide berth around the grazing animal. In the distance, we could see the herd returning to the meadow, climbing up a steep ridge. It was amazing how easily such large, bulky creatures could climb the steep drop. Pronghorns were grazing nearby, coexisting peacefully with the bison.  We reached the road and our car, and were grateful to be done with our heavy packs. As we snacked on some granola bars and put our things away in the, we saw a fox running alongside the road.

It was bittersweet to leave Yellowstone, as we were excited for Glacier but had had such an amazing time in Wyoming. We made one last stop at Mammoth Hot Springs and loaded up on hot drinks and souvenirs. There were elk wandering around all over the area, which was surprising considering that it was such a heavily (human) populated area with shops, restaurants, and lodges.

elk on the lawn

We drove out the north exit, finally on our way to Montana. 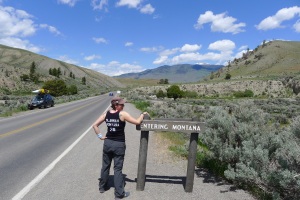 Within a few hours we reached Bozeman. After a quick errand at the Bozeman REI, we enjoyed a late lunch and some local beers at the Soup Shack downtown, then checked into our motel. After taking the best hot shower after, we spent the rest of the evening take care of a few more errands–namely, laundry. The rest of the night was spent relaxing on actual beds for the first time in a week, watching some TV while drinking a bottle of wine left over from the wedding, and poring over Montana guidebooks in preparation for Glacier.