It’s blazing hot in Chicago right now, a world away from the polar vortex of last January. Every remaining weekend of this summer is already packed to the gills with plans; it’s utter mayhem. I love summer and wringing every last sun-soaked second of fun out of these three months, but this is also why I relish the cozy calm of winter and its time of forced hibernation.

Now that we’re at the halfway point of 2019, I thought it would be a good time to check back in on my goals for the year, in part to keep myself on track as well as make tweaks to stuff that isn’t really working for me.

For the rest of tonight, I’m gonna sit and relax in our sunporch, read a book, and listen to the summer cicadas.

Aww, look at wide-eyed innocent me back at the beginning of 2018. So full of hopes and dreams! This year was bonkers but I feel good about what I accomplished.

So I didn’t write 6 hours a week, or master a handstand, or completely kick sugar.  I had some crappy setbacks  and work struggles and stressful months along with the amazing months, but of course that’s life, and it’s not what I choose to dwell on. I want to carry good vibes only into 2019.

For the month of March, I set a challenge for myself to do yoga every day, aiming for 30 practices total (giving myself a rest day halfway through). I mostly completed my goal, practicing on 27 out of 31 days. So, I took a few days off but if there’s anything I’ve learned from yoga, it’s to be forgiving to myself when I’m not perfect. In order to fit 30-75 minutes of yoga into my daily routine, I eliminated my usual cardio workouts from my week, instead focusing on getting on my mat.

This was the perfect challenge for me at this time; I’ve been wanting to expand my practice and increase strength and flexibility while also maintaining my daily meditation habit. I mostly went to power vinyasa studio classes which run 60-75 minutes long. On the days I practiced from home, I used the Cody App which I like for the variety of classes. As a former roller derby skater and Crossfitter, yoga is a big change of pace for me. In the last few years, I’ve been leaning towards the more slow and deliberate pace of yoga and Pilates, mostly because of the limitations I have in my knee after my injury 7 years ago and subsequent surgery. I can’t do All The Squats anymore, which makes me sad. But with yoga, I’ve found a way to increase my strength that doesn’t also make me constantly fear injury. And spoiler alert–I’ve gotten pretty damn strong and I kinda even love side planks now. 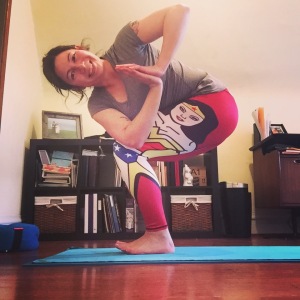 A few takeaways about the 30-day challenge:

Now that my self-imposed challenge is over, I’m adding cardio back into my routine a few times a week, but I plan to keep yoga as my main form of exercise on most days.

When I first came up with the name for this blog, I envisioned it as a place where I’d write about health and fitness for the drunk and lazy. The focus of the blog eventually evolved into something different, but fitness (and occasional drunkenness) remain a regular part of my lifestyle.

During the recent onslaught of back-to-back-to-back holiday parties, I did a terrible job of focusing on health and fitness and fully gave in to be drunk, lazy, and gluttonous. It was such an indulgent binge of ridiculousness that I’m actually looking forward to getting back to some healthy habits now that New Years is over. And you guys, guess what?? Sometime in the past year I got really into yoga.

I used to hate on yoga because I thought it wasn’t enough of a workout. I used to play roller derby and do Crossfit, so in my mind, if I wasn’t burning out my legs by alternating wind sprints with wall sits, or flipping giant tractor tires while grunting and howling like a zoo animal, I wasn’t really getting in shape. Yoga was for girls who spend $100 on stretchy pants and wore them to Starbucks as often as they did to the studio. I am fully willing to admit I was wrong (well, those people do exist, but if they have the strength to pull off a perfect side crow pose, they’ve earned the right to trot out those LuluLemons anywhere they please).

Last March, I found a yoga class that I enjoyed, challenged me, and even left me feeling sore the next day. This blew my Crossfit-brainwashed mind, so I got a monthly membership and kept it up through the fall until we moved away from the studio. Nowadays, I do a yoga/Pilates workout DVD at home that allows me to be lazy in that I don’t need to leave the house to get in a good workout. Also, exercise DVDs are semi-hilarious because you eventually memorize all of the small talk the instructor spouts. I like to imagine backstories for the people in the video; for example, I think that Chalene and Janelle are total Mean Girls to Michelle, who is stuck in the role of showing the modified version of each move. You can tell this because on one of the DVDs, Chalene tells Michelle during an ab exercise that she’s “blessed with a long torso” and Michelle makes a face at the camera, like “I just got Lacey Chaberted.”

I’ve also come to enjoy the meditative quality of yoga, which is especially surprising considering I’m the type of person who can’t look at Facebook for more than 5 minutes without ADD kicking in and making me switch to Instagram or Twitter. My husband once watched me play with my phone over my shoulder and he said it made him dizzy. During a 75-minute yoga class, I can shut off that part of my brain and find an inner calm.

Looking ahead into a bright shiny new year, I definitely plan to continue to make yoga a part of my day as often as possible. Though I still may flip some giant tires; a girl’s gotta live a little.