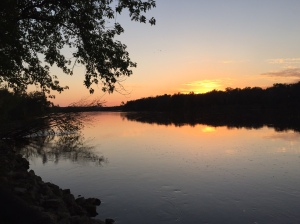 October is my favorite month, and every year I love to revel in it as much as I can. Shockingly, we haven’t done fall camping in Wisconsin before, so we recently righted this wrong and visited the Spring Green area for a beautiful weekend outdoors with friends.

We arrived at Friday night at our favorite campground, which is nestled against the Wisconsin River. After setting up our tents, we stopped by the local bar for some Spotted Cows and burgers, then spent the rest of the night enjoying the crisp coolness and crackling campfire. The temperature hovered in the 50’s,  and a mist lingered on the surface of the water, like ghosts rising from graves. 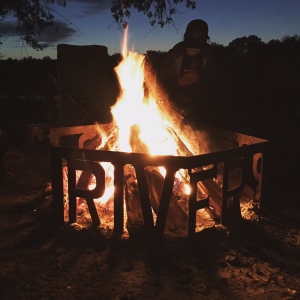 On Saturday, Kurt and I had booked a double-header of local, spooky exploration. First, we went on a tour of Taliesin, Frank Lloyd Wright’s home and studio in Spring Green. The home was originally completed in 1911, and was designed and built for Wright’s mistress, Mamah Borthwick. Horrifically, she was murdered in the home along with her children and several workers; the killer was a disgruntled servant who set the house on fire and attacked the victims with an axe as they tried to flee for their lives. Before booking the tour, I had no idea about the home’s tragic history. This added cast another dimension to the tour, as we imagined Wright’s grief and the weight of his loss as we walked the halls and looked out the windows that framed landscapes of the hills and valleys. 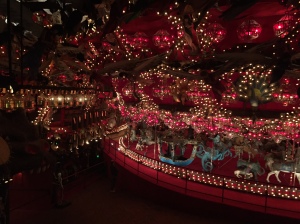 After the tour, we joined up with our friends for the next destination: the House on the Rock. The original house was built by Alex Jordan, an architect who had a tense rivalry with Frank Lloyd Wright. The Japanese-inspired design was a direct nod to Wright’s personal aesthetic. As Jordan grew older, he turned into an eccentric recluse. He had his friends who traveled the world bring back trinkets and oddities to add to his growing collections. The tour includes the original house plus the grounds that hold (among other items): a dollhouse collection, a warehouse-sized replica of a squid fighting a whale, rows of suits of armor, music machines that take up entire rooms, and the world’s largest carousel. More of a museum than a house, the attraction is dimly lit and random music played by mechanical violins and horns drifts down the halls. Some of the older machines aren’t quite in tune, making everything seem even more surreal and slightly askew.  A friend once perfectly described the house as “like being inside somebody else’s nightmare.”

And yet, this wasn’t even the main event of our trip; that came a few hours later. We went back to the campsite to make dinner over the fire, have a few beers, and rest after spending the day on our feet. Once the sun set, a few of us who sought more thrills drove back to the House on the Rock for The Dark Side experience. In the few hours between closing the main attraction and reopening, parts of the grounds were turned into a haunted house. We started down an outdoor path lit solely by torches, turning into a human knot as we clung to each other, seeking protection. None of us had been to the Dark Side version of the house before, and we had no idea what to expect. To add to the horror, we seemed to be the only 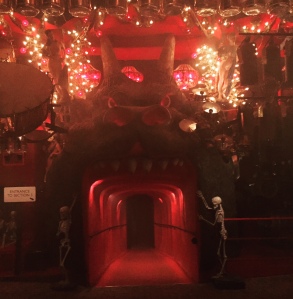 people there… until a clown leapt out of the shadows and spooked the shit out of us. We dissolved into the nervous laughter that immediately follows a jump scare. The clown silently gestured us toward a path back into the house. Inside, the lights were now completely turned off, and occasional strobe lights burst through the space like lightning. We walked into the carousel room, which was (even more) eerily lit, making the wooden animals appear nightmarish and leering. For the next 40 minutes, we wound our way back past dollhouses, empty suits of armor, and through the Organ Room. Along the way, other ghouls and zombies leapt out at us from the shadows, startling us into more screams.

We drove back to camp on an unlit country road, through the darkness of the trees. A cheery campfire greeted us, and we joined our friends for beers and boxed wine under a harvest moon.