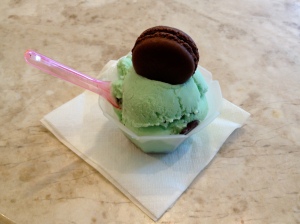 I just got back from 4 days in New Orleans with friends, and considering that most of our destinations were food-related, it seemed to make the most sense to do a food diary of the trip.

Saturday lunch: Mother’s Restaurant (as seen on Man Vs. Food). I had red beans and rice with anduoille sausage, smothered cabbage, and turnip greens. The floodgates of deliciousness officially opened.

Saturday dinner: drunken burgers at Yo Mama’s Bar & Grill in the French Quarter. It worked perfectly in soaking up some of the Big Ass Beers to Go swirling around in my belly.

Sunday brunch: Muriel’s Jackson Square Restaurant. The Bloody Mary was one of the best I’ve ever had. I tried turtle soup for the first time, and had more anduoille with my omelet and homefries.

Snacktime: Sucre for gelato and macaroons.

Monday lunch: Cochon Restaurant. Here we kicked it up a notch. I ordered a small plate of  braised pork cheeks with sauerkraut potato cakes, applesauce, and feta. I also shared Kurt’s fried alligator with chili garlic aiolo and rabbit with dumplings. Nothing like three different species hanging out in your stomach.

Cocktail time: We went on a tour of New Orleans Rum. Many samples and rum balls later, I am a rum-and-iced-tea convert.

Monday dinner: Jacques-Imo’s Cafe. Blackened mahi mahi with a pistacio sauce, rice and beans, and cabbage can do no wrong. Also, I can now say I’ve had alligator cheesecake (really more of a quiche but the former sounds awesomer).

Tuesday breakfast snack: Cafe Du Monde for beignets and coffee. Fun fact: they were filming a movie while we were there. Keep your eyes out in 2013 for Now You See Me, thought we had a brief fake-out when we noticed one of the production signs was mislabeled “Step Up 4.” (By the way, beignets kick regular donuts in the bunghole.)

Tuesday lunch: Royal House Oyster Bar. Last meal, booo! I had a classic muffaletta the size of my head and one last Bloody Mary in a go cup.

GOODBYE NEW ORLEANS!!! You were dope.

We landed in chilly Chicago Tuesday night, and the first thing I ate back on Illinois soil was a mother-effing Big Mac.