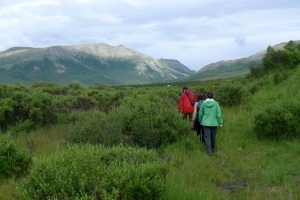 This was our first full day at Denali National Park, and we started it off by going on a hike near our campground at Savage River. There are actually very few man-made trails within the national park, so we found ourselves searching for a route through the shortest brush or over the calmest river crossings. Walking through brush is much more tiring than a regular trail, which explains why our book on camping in Denali usually estimated an hour per each mile on their recommended hikes. The ground near Savage River was also very spongey with moss, giving you the feeling of walking on pillows. We went out for about 2 hours and didn’t spot any wildlife but did encounter a giant bear paw print and many piles of moose droppings. 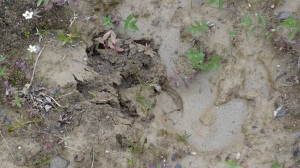 what big feet you have

After our lunch break, we took the roadside trail from the Visitors Center to the kennels for the sled dog demonstration. Before the talk started, we got to pet the dogs and explore the kennels. The sled dogs each had their own little dog house and seemed excited for people to visit them. One of the younger dogs, just past puppy age, got ahold of my watch strap and didn’t want to let it go.

“I loved you in Snow Dogs!”

We also finally spotted some wildlife–ravens the size of footballs were flying and squawking throughout the grounds.

The ranger asked the 4 of us to help her with a human demonstration before the dogs were brought out. Bob and Amy were ‘swing’ dogs, helping the lead dogs maneuver the pack, and Kurt and I were lowly ‘team’ dogs doing the grunt work. When the staff went to select the dogs that would get to be a part of the demonstration, all of the animals went nuts, barking like crazy to get selected. They really like their job.

On our way home, we had a wildlife sighting: caribou! It was pretty far from the road, but our shuttle bus driver pulled over so we could take pictures and check it out with binoculars. 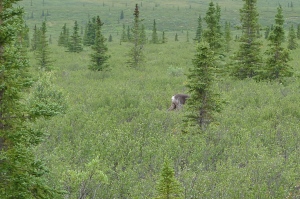 Back at our campsite, we had a much closer animal counter when a sneaky bird pulled a raw steak halfway off a plate; Amy and I saw it just in time to scare him off but it did get away with a good bite.

A ranger invited us to a presentation he was giving about wolves at the amphitheater right by our site. I’m pretty sure we were the only drunk attendees. He told us that he spends his summers at Denali and works in Hawaii for the rest of the year, which sounds like the most awesome living situation ever.

Afterwards, we went back to our Alaskan beers and Bota Boxes, made some s’mores, and went to bed to re-energize for our next day, which was a big one. 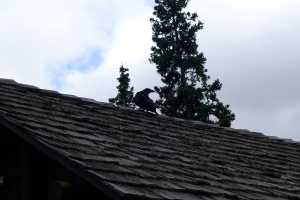