One week after returning from Honeymoon Roadtrip, I embarked on a quick weekend trip that was a total 180 from visiting national parks and exploring wilderness. My sister and I had planned a very ambitious weekend trip of flying to New York City and seeing three Broadway shows.

It all started with the announcement that Neil Patrick Harris was taking the lead role in Hedwig & the Angry Inch. Both of us being huge fans of the musical, we decided that the show was definitely a must-see and we were both willing to splurge on the tickets and airfare.

On Friday night, I flew in and met my sister who had arrived one day earlier. She was out with friends, including our gracious hostess for the weekend, at a bar in the Clinton Hill area of Brooklyn. We threw back some pints and then settled in for the night, excited for the next big day. On Saturday morning, we explored the Brooklyn Flea, had fries from Pommes Frites, and shopped at the Strand before heading back to the apartment to get ready for Hedwig.

The play was everything we dreamed it would be and more. NPH was incredible as the lead role, and Lena Hall was heartbreaking as Yitzhak. After the show, we were giddy with excitement but had to quickly get over to Chelsea for the next show, Sleep No More. An interactive retelling of MacBeth, the experience started with us all donning our required masks and getting split up from each other. For the next few hours, we wandered on our own through several stories of a NY loft redesigned as a 1920’s Irish hotel, following actors as they told a story with dance, movement, and emotion. It was a unique experience and made it worth staying out until 3 am. 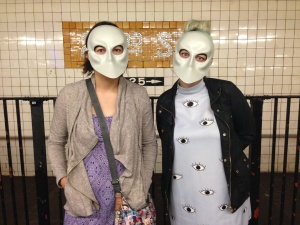 After the show, we cabbed to the airport and flew back home. It was an awesome (expensive) weekend , perfect for a few musical theater geeks like us. As much as I adored the two weeks of parks and nature, it was nice to be reminded of some of the things that make city-living so great.