It’s impossible to visit Iceland and not fall in love with it. Kurt and I, along with 6 of our good friends, just came back from an 8-day trip on the northern Atlantic island nation, and I can’t stop thinking about it. With a few more friends planning upcoming trips and asking for advice, I figured I’d write up my travel diaries so I can keep my notes in one easy-to-access place.

Our flight left O’Hare on Friday night at 6:30 p.m., and landed in Reykjavík the next morning at 6:35 p.m. We also learned shortly before our departure that the night of Feb. 10 would also see a full moon, lunar eclipse, and a comet passing close to Earth. Given these unusual circumstances lining up together, I joked that we’d have Outlander-esque conditions lined up to accidentally travel through time and arrival in feudal Iceland, to which my friend replied “Geothermal Tub Time Machine?”

We tried to get some decent sleep on the plane, and landed in Rekjavík without incident or unexpected time travel. First things first, we followed the advice of our Airbnb host and stocked up on beer, wine, and booze at the airport Duty Free. We had been warned that alcohol in Reykjavík is extremely expensive, and we could get it for nearly half the price at the airport, which is something even the locals do.  Afterwards, we took a Flybus (roughly $20 in USD per person, a pretty good deal) for the 50-minute drive from the airport to the Reykjavík bus terminal. Our Airbnb wasn’t ready until 2 p.m., so we stowed our luggage in the large lockers at the bus terminal, which were roomy enough to fit 2 fully packed bags, or house a down-on-his-luck muppet.* 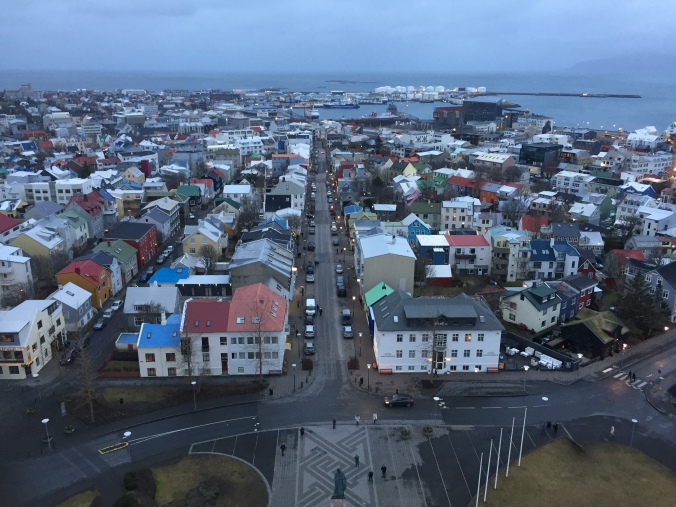 We walked into town, and kicked off our trip by taking the elevator to the top of the bell tower of Hallgrimskirkja, a cathedral. It offered one of the best views of all of Reykjavik and was a nice way to start our day. Afterwards, we got coffee and a traditional breakfast across the street at Cafe Loki. I picked a sampler plate and gave the fish paste on toast and sheep’s head jelly a whirl (mostly because I wasn’t entirely sure what I ordered). I’m a pretty adventurous eater and finished most of my plate. 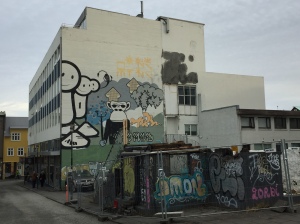 After walking around a bit and checking out some shops, we picked our bags up from the bus terminal and checked into our Airbnb. Our house was conveniently located just a few blocks from all of the bars and restaurants on Laufásvegur. Even with 7 people, the house was roomy and comfortable. A few people napped while the rest of us sampled our Icelandic beers in the kitchen. We weren’t that into the Viking Light, so we’d have to give Viking Hev** a shot later.

Once everyone woke up, showered, and assembled themselves, we had our first group dinner at Vegemót Bistro Bar. Just as we’d been warned, it’s pretty impossible to get a meal in Rekjavík for less than $25-30, even a burger and fries. Beers are an additional $12-14. The flash sales on IcelandAir may convince you that Iceland will be an affordable vacation spot, but once you land, it’s an entirely different story. At least dinner was good. We followed up with drinks at Ölstofan, which reminded me of the Ukrainian Village bar scene circa 2002. Memories get murkier after we moved on to Bar Ananas, a tiki bar where Icelandic rappers happened to be performing. Outgoing Americans that we are, we chatted with a few locals including one performer who I decided to call “Icelandic Justin Timberlake” for the rest of the night (it was the hair). After many rounds of Einstok, we staggered back to the Airbnb to catch up on an overdue full night of sleep.