The alarm went off at 7 a.m. Outside of the Land Rover, the sky was still dark. We’d never fully see the forested area where we spent our last night on the road. I got dressed, put my clothes in my backpack, and then tucked myself as small as I could into a corner of the Rover so Kurt would have room to change and pack. We set the GPS for Reykjavík and began the 2-hour drive back to town. 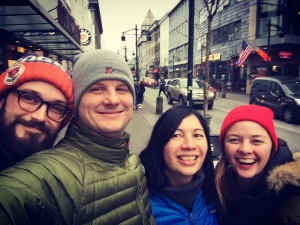 After dropping off the Land Rover at Kúkú Campers, we took a taxi to our Airbnb. Our friends wouldn’t get back from their Höfn road trip until that evening, so we had the place to ourselves. Thursday was also the only day that our trip overlapped with my sister Lauren and her husband Charlie’s Iceland trip; they had flown out a few days earlier than us and went on a 3-day ice caving expedition. We met up with them and exchanged vacation stories. Most excitingly, Lauren and Charlie had seen the Northern Lights the night before! A lucky combination of a clear night sky and a 4 on the Aurora forecast had allowed them to view the lights from the courtyard of their hotel. Lauren showed us some of the amazing photos she took on her camera; they got a light show for a solid hour. 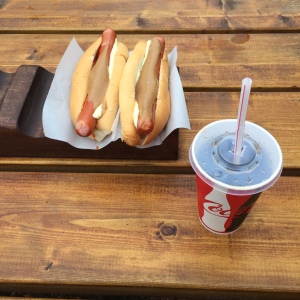 We walked downtown to get lunch at a hot dog stand and do a little shopping. We discussed checking out the Icelandic Phallological Museum, but it a long walk away, and I said “I feel like the whole world is a penis museum.” Instead, we had a few pints at an Irish pub called Drunk Rabbit.

Back in Chicago, my friend Ray (part of the Höfn crew) and I have a monthly get-together with friends called Karaoke Club, where we visit a new karaoke bar every third Thursday of the month. Since February’s third Thursday fell during our Iceland trip, we made a plan to hold a club outing in Reykjavík. During our vacation preparations, Ray did some research and found a hostel on the west side of town that has a private karaoke room. Before leaving for Höfn, Ray left a note in the kitchen for us with the name of the hostel and a start time of 9 p.m. 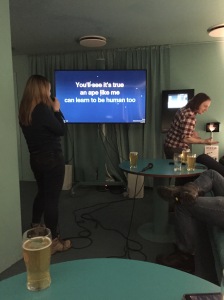 It was Lauren and Charlie’s last night in Iceland, so we splurged on a really nice dinner at Lobster & Stuff, a restaurant on the water, then walked over to Oddsson Hostel to meet our friends for karaoke. Oddsson is the swankiest hostel I’ve ever seen, more of a hotel hybrid. The karaoke room is a soundproof mirrored cube in the middle of the restaurant/bar of the hostel, so people can watch you but can’t hear. It’s pretty much the greatest thing anyone’s ever invented. We loaded up our song choices in the self-service karaoke machine, and proceeded to drink, sing, and have a blast for the next few hours. My song choices: “It’s Oh So Quiet” by Björk (I had to), “Break Free” by Arian Grande, “A Whole New World” duet, “Love on Top” by Beyoncé. There may have been some Carly Rae Jepsen too; it’s hard to remember after we were a few Einstoks in.

The karaoke machine shut off promptly at the end of our rental period (fittingly during Ray’s rendition of “We Gotta Get out of this Place”), so we met up with the rest of our friends and walked back to the downtown area, hit up one more bar for a round, and went back to our Airbnb to finish off our remaining Duty Free alcohol while keeping an eye on the Aurora forecast. The website didn’t look promising, but we didn’t want to give up hope just yet.