Finally, the first morning of our trip where we could actually sleep in!! It was sorely needed after the previous night’s karaoke journey. Our only plans for the day included some final sightseeing and shopping, so we had most of the morning to get ourselves together and properly turn back into functioning human beings.

Necropolis/Glasgow Cathedral
For our day of sightseeing, we met up with Elizabeth’s friend (hi Erik!) who had recently moved from Chicago to Glasgow, his wife’s hometown. We grabbed a pint in a beer garden near the Cathedral to catch up/chat for a bit, then walked to the Necropolis, a Victorian-era cemetery situated atop a grassy hill.  Among the crypts and headstones are monuments from various architectural styles, and from the top of the hill, you get an incredible 360-degree view of Glasgow. 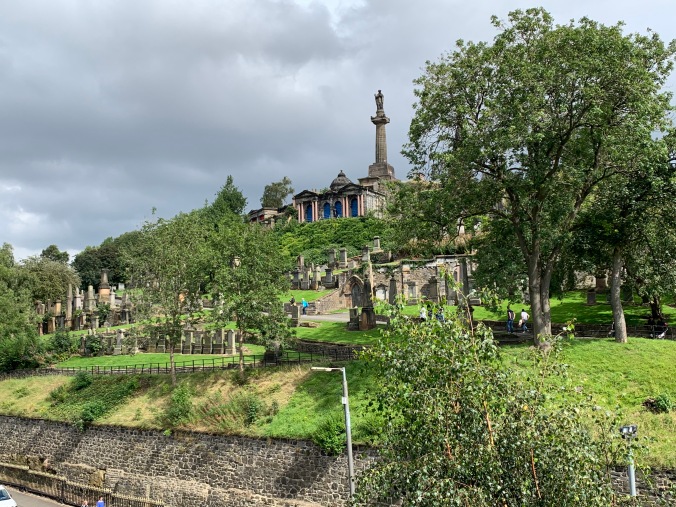 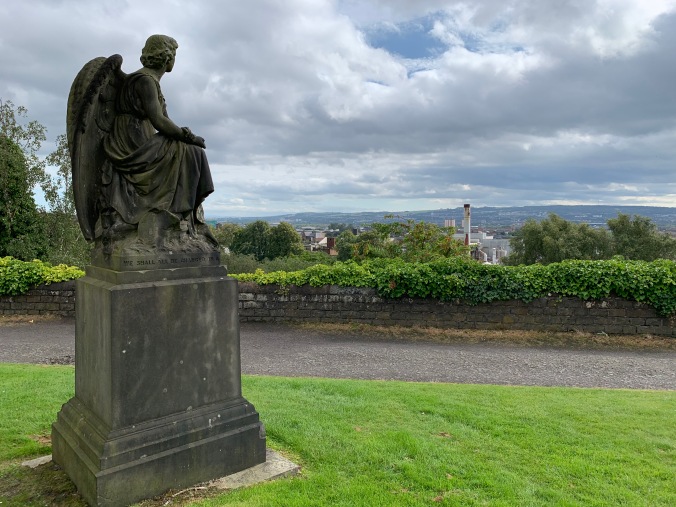 I am almost as obsessed with medieval cathedrals as I am with castles, pretty much ever since reading The Pillars of the Earth in high school. Glasgow Cathedral first opened in 1136, and it’s one of the few Scottish medieval churches to survive the Reformation intact. With dozens of other tourists, we walked through the nave, gazing at the intricately carved ceiling and admiring the way sunlight filtered through the stained glass windows. It’s impossible to capture the beauty and ornamental details in iPhone photos, especially with a bunch of other tourists wandering into the shot, but I tried my best. I also lit a votive candle (something I do in every church I visit). 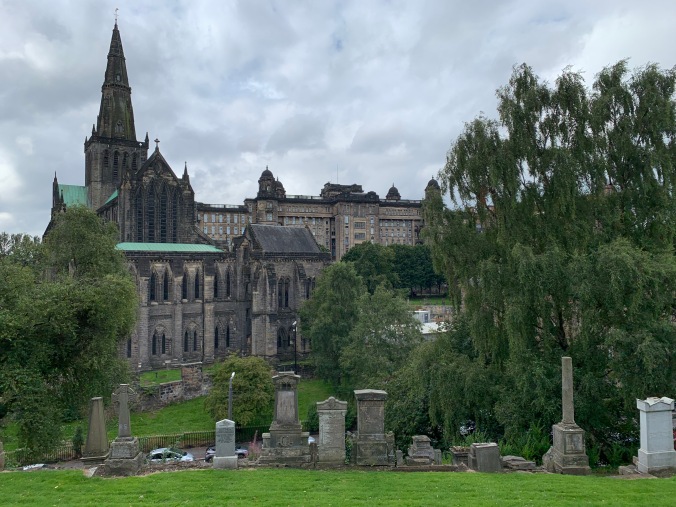 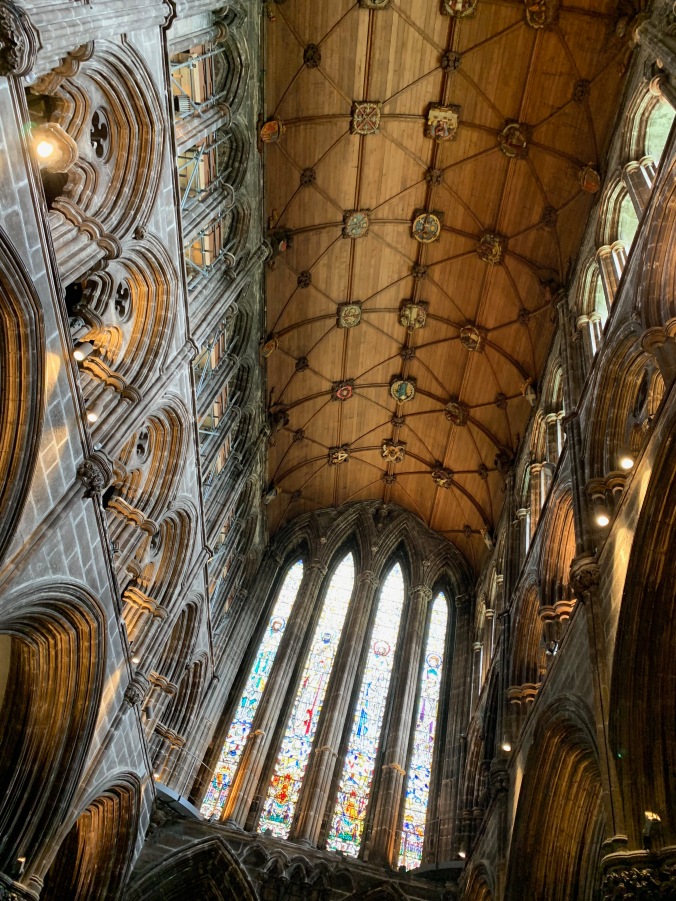 Outside near the St. Mungo Museum, we spotted a Clootie Tree, covered with pieces of cloth that have been blessed in a holy well and left as offerings by people seeking healing. 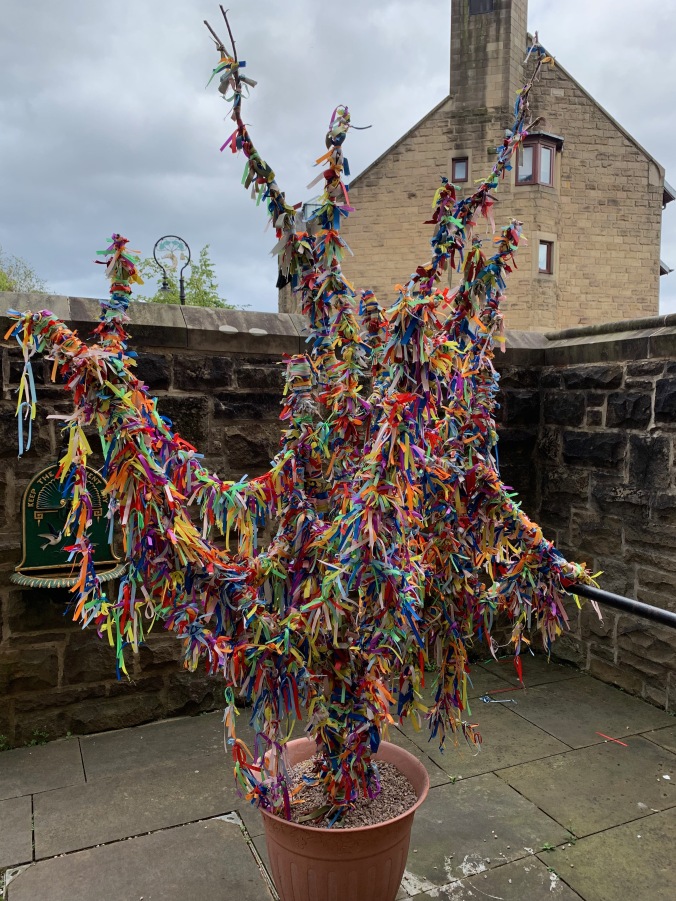 We walked back to the city center to get some food and do the last of our shopping. A sausage roll and a Diet Coke was exactly the fuel I needed to finish up my shopping and make important decisions like, Do I need this cashmere scarf? (yes!), and Do I need this kilt yoga calendar (decided no but I already regret it!!). Erik pointed out the statue of the Duke of Wellington, which locals consistently top off with a traffic cone on his head. The prank first began in the 1980s, and in 2017 the city gave up fighting it and proclaimed the cone an official part of the statue. This is a true story and I love it. 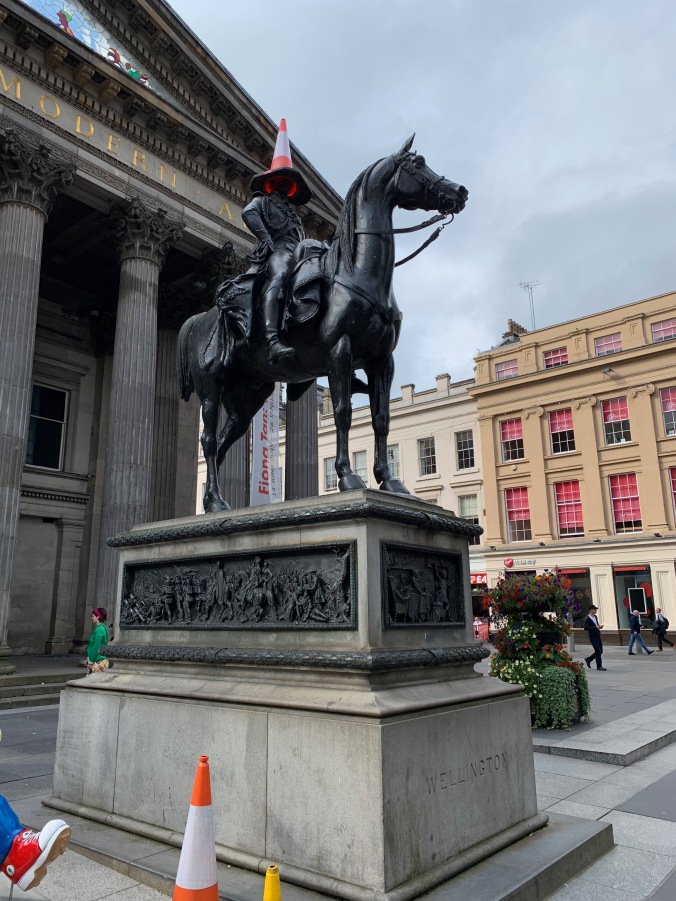 After walking all day, we were ready to sit down and eat a real meal, so we made a quick run back to the Airbnb to drop off our purchases and begin packing up some of our suitcases (insert all the sobbing emoji). We headed back to Argyle Street and made a few stops for pre-dinner cocktails, including a nice outdoor gin garden (as Elizabeth put it, “Scotch is like the deep dish pizza of Scotland because everyone who lives here drinks gin”).

For our final meal, we went to Fanny Trollope’s Bistro for traditional Scottish food (I highly recommend that you read their story because it is great). I ordered cullen skink,  a thick soup made with smoked haddock, onions, and potatoes, and it was delicious. Seriously, anyone who claims that the food in Scotland isn’t good didn’t go to the right restaurants, because I loved just about everything. We all felt the emotional weight of it being the last night of a fantastic trip, and so we went around the table and shared all of our favorite moments. After dinner, we walked to another bar for a final nightcap and a toast to our Scottish adventure.