After two nights at Buck Lakes, we were ready to move on to some new scenery. Kurt was interested in going cross country to reach Karl’s Lake, which was off trail a ways. To get there, we crossed over a ridge, then down a large expanse of rock towards a forested area. One thing about backcountry camping is that it makes you aware of your strengths as well as your limitations. For me, I discovered my uneasiness over going off-trail for an overnight stay, even though it was just a few miles. While Kurt was confident navigating with a topographic map and a compass, I was afraid of a potential scenario where he was injured or incapacitated,and I had to find my way back to the trailhead to get help. I wasn’t confident that I could do this, so I asked Kurt if we could stay at a lake closer to the trail instead. He saw that I was outside of my comfort zone so he agreed to end our little off-roading adventure early. I felt a little bit like a wimp, but I also knew that it was the right choice for me at that time. Just a few years ago, I had been nervous about camping in the backcountry where bears were present, but with time and experience I was now doing just that for close to two weeks straight. Learning to be comfortable navigating off-trail would be a new future goal for myself. 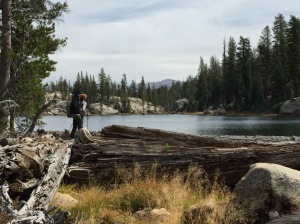 We continued along the trail to Wood Lake, and spotted a possible good campsite across the water. To get there, we crossed a series of downed logs (as we learned later, we took the long way). While I was setting up the tent, I heard Kurt say something like “Is this human?” That piqued my interest, so I went to see what he was looking at: a clump of long black hair intertwined in some tree bark. The sight creeped me out, but when I looked closer, I realized that it was most likely horse hair. The strands were long, coarse, and at the perfect height  to be left by a stock animal rubbing up against a tree.

We had just finished setting up camp and were hanging out by the lake when two other hikers came along, looking for a site. They were two men about 15-20 years older than us, both from the northern California area. We chatted with them for a bit; they had stayed on our site during a previous trip. They continued along on the their way to set up at another spot further down the lake, tucked back behind the rocks.

We made a fire as the sun set, then heated up our dinner of Ramen noodles with added powdered eggs, dehydrated veggies and chicken. It was a cloudy night, the moon completely obscured. Now, I never get afraid of the thought of ghosts or monsters while camping; there’s too many real, practical things to fear like wildlife, lightning, hantavirus, flash floods, etc. I don’t know what it was about that night–maybe the initial unsettling discovery of the hair tangled on that tree, or the lack of any moonlight. But for whatever reason, the thought of The Blair Witch Project crossed my mind. And of course once I tried to shake it, it was all I could think about. Just beyond the fire, the forest was enveloped in velvety darkness. When I turned on my headlamp, a beam would illuminate only the handful of trees closest to us, the light dissipating weakly into the black forest. Once I accidentally turned on my headlamp on the strobe setting, and the intermittent flashes of light on the trees, then pitch darkness, made me think of Twin Peaks: Fire Walk with Me, which was even more unsettling. That night, I burrowed deep into my sleeping bag like a dog relying on its thundershirt for comfort and security.