Orlando, Florida is a place you go to for a reason–a sporting event, a theme park visit, a conference. It’s NOT a place you go just to check out the culture. Listen, I once lived in Las Vegas by choice so I am not against mass marketed entertainment. I LOVE me an entertainment complex where I can ride a mechanical bull, see Britney Spears perform live, and eat a steak for less than $10 all in the same night.

Orlando is a lot like Las Vegas, but instead of gambling and debauchery, they have theme parks galore. Both destinations encourage nonstop spending, have strip malls full of every chain restaurant you can think of, and attract the kind of tourist that likes to drink Jager bombs all night while still wearing their American flag swim trunks. On our first day in town, we ate back-to-back meals at chain restaurants, the second of which had a menu that included two full pages of Guy Fieri dishes.  But. But! I had a fantastic weekend, side trip to Flavor Town and all.

There were two very good reasons we ventured to Orlando, and they are Peak Kim Nelson:

The Wizarding World of Harry Potter/Universal Studios
We had one day to see it all, so we bought the single day park-to-park ticket and planned for an early arrival. Obviously, spreading the Harry Potter-themed attractions across two parks is all a big scam to force you to buy tickets to both, but as soon we reached Hogsmeade, I no longer cared. I didn’t anticipate the wave of emotion I’d feel upon entering Hogwarts Castle, and I don’t care how nerdy this sounds, but I teared up a bit. My rational adult brain knew that I was walking through a fake castle replicating a made-up fantasy franchise, designed by engineers to push the right nostalgia buttons, all in the armpit of America. But in the moment, I had entered the memories of a beloved book that has given me escape and comfort and catharsis many times, over through multiple re-reads and movie viewing.

Though we never had to wait in line for longer than 40 minutes, the queues for the Harry Potter-themed rides in Hogsmeade and Diagon Alley were actually enjoyable to stand in because of the level of detail in the surroundings. Dumbledore’s pensieve! The Fat Lady portrait! Professor Sprout’s greenhouse! We wandered through the shops of Hogsmeade, drank butterbeer, and took the Hogwarts Express to King’s Cross. In “London,” we saw Kreacher glare through the window of 12 Grimmauld Place. I bought a Ravenclaw jersey with Cho Chang’s number and a Deathly Hallows enamel pin. 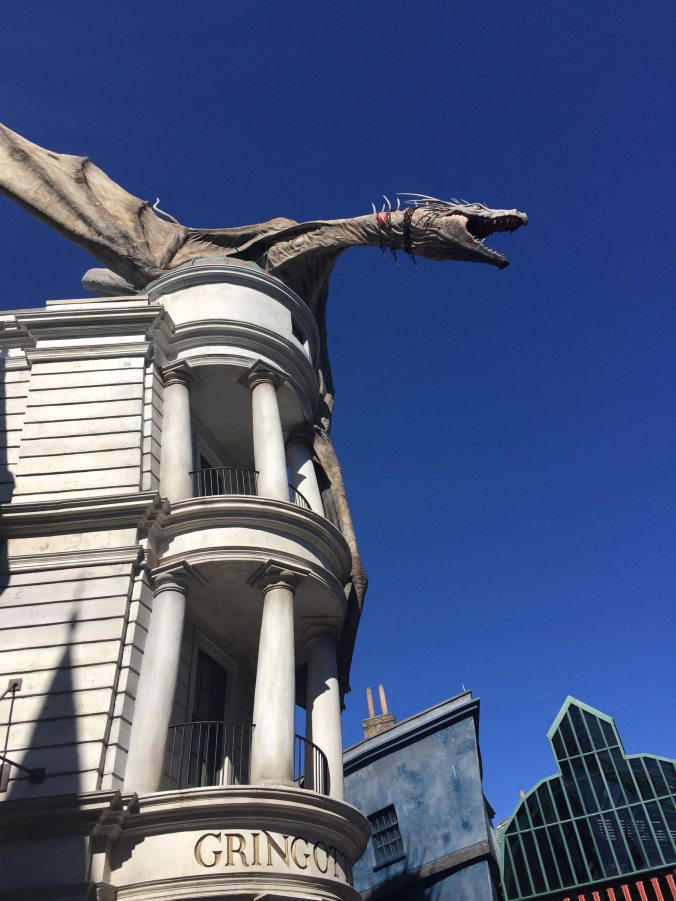 the dragon atop Gringotts Bank 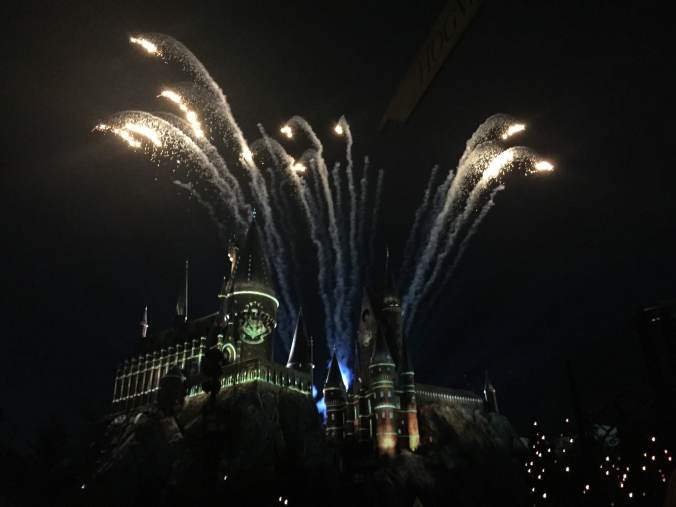 Hogwarts Castle during the light show

College Cheerleading Championships
When Kurt asked me if I wanted to go to Orlando to see his niece compete in the College Cheerleading and Dance Championships, that was one of the fastest YESes that ever came out of my mouth. I LOVE competitive cheerleading for reasons I can’t articulate. I wasn’t a high school or college cheerleader (though, ahem, my eighth grade squad was regionally famous on the north suburban  Chicago Catholic school circuit for our choreographed pom routines to Erasure songs) but I love watching cheer competitions on ESPN. They’re a highly entertaining mix of gymnastics, dance, and Jock Jams–I mean, what’s not to love here?? OF COURSE I WANT TO SEE BRING IT ON IRL.

As we walked up to the gates of the ESPN Wide World of Sports complex, the grounds were packed with hundreds of cheerleaders in various bold-colored uniforms. Squads warmed up and practiced moves on every available open stretch of grass. I heard a man say as he walked past, “I don’t see any football players” and I immediately wanted to punch him in the mouth on behalf of all of the incredible athletes WHO DON’T NEED TO CHEER FOR NO MAN.

Inside the arena, I had flashbacks to my days of roller derby weekend-long tournaments. Young athletes huddled in corners, mentally preparing for competition while tuning out the world with their headphones. Teammates on crutches followed their squads, visibly heartbroken over not being able to participate. After finishing the first round, cheerleaders stood in the concession line with ice packs saran-wrapped to their legs. I dodged team prayer circles to get to the bathroom (OK, that never happened at derby tourneys, more like “Thong Song” dance circles).

With our day passes, we were able to move around the grounds to check out various parts of the competition. We watched Division I and II Girls and Coed Cheerleading, Dance (jazz, hip hop, classical), and even a Mascot contest. Chip the Buffalo won my heart by twerking then lying down and refusing to leave the stage.

The whole day was a blast and I highly recommend going to a live cheerleading competition if you ever get the chance, especially if you enjoy Cardi B, because we sure heard a lot of her music that day.

All in all, Orlando, I enjoyed you! There was one morning we saw a theme park worker in full costume in line at Starbucks, and it struck me how strange it must be to live there full time. Those are the stories I’m always interested in–I want to see the dive bar where all the theme park mascots get loaded together after their shift ends. I want to hear what the chipper cashier in Hogsmeade who spoke to me as if I were the new Seeker on Ravenclaw’s Quidditch team actually thinks about tourists. How many times does the live actor in the Fast & Furious preshow have the same scripted, pre-recorded conversation with a videotape of Ludacris before she slowly loses her mind? I would read a full scientific study about the symbiosis of the Orlando theme park ecosystem.

Travel Pairings
I love reading books set in the location I’m visiting. For all of my future travel-related blog posts, I’m going to share a book, film, and music recommendation to pair with my destination.

2 thoughts on “Doing the Most in Orlando, FL”