The Highlands
One of the first lessons we learned in the Highlands was to add 30-40 minutes onto all our driving times previously estimated from our ignorant positions in front of Google Maps back home. We had booked a horseback riding tour through the Highlands, supposedly 90 minutes from Spean Bridge. However, the final stretch took us on a single-lane winding road in and out of a valley, with multiple byway stops in order to let oncoming vehicles pass. By the time we reached the stable, we were nearly an hour late and our group had left without us. Even the sheep on the stable grounds ran away from us before we could pet them. Our disappointment was palpable. But sometimes, things are just not meant to be, so we pivoted to a new plan: hiking to Plodda Falls.

The hike turned out to be the perfect thing to lift our spirits. A short walk from the trailhead led us to the top of the falls, and we ventured out onto a wooden bridge over 40 meters (131 feet) above the riverbed. Among the treetops, we had a fantastic view of the forest all around us. I’m telling you, the greens in Scotland are unreal–leaves, lichen, and moss saturated with chlorophyll and rain and fairy magic probably, to the point of bursting with color. We followed the trail down alongside the waterfall, where we got drenched with mist. I was thrilled for this chance to do some hiking before we reached the city-bound stretch of our trip, and happily stomped my way through puddles to get the most of out of the waterproof hiking shoes I’d hauled across the Atlantic.

Fun fact: I have a Loch Ness monster tramp stamp (or as I call it, a Triassic stamp, ba-dum-bah!) I am a sucker for any sort of mythology, especially if it involves fantasy creatures. The area surrounding Loch Ness is full of kitschy tourist attractions, pretty similar to what I experienced recently in Roswell, New Mexico. This was where we did some souvenir shopping browsing the selection of t-shirts, tchotchkes, and calendars of men in kilts. We paid £7 each to enter a Nessie exhibit, which I found rather disappointing until we discovered a hidden OUTLANDER-THEMED ROOM (seriously, way to bury the lede, Nessieland!). After doing a quick change out of our hiking clothes behind a shed in a parking lot, we rushed over to our next agenda item, traditional tea service in a country house. Though first, we did a shot of whisky sharing Adrienne’s family name as we stood alongside Loch Ness, toasting with her clan motto: “If not peace, war!”

During our tea (which included Prosecco, cold sandwiches, appetizers, and a crowd-pleasing three-tiered tray of desserts), we noted the background music, a Spotify playlist of acoustic covers. Little did we know at this point the popularity of this particular playlist in Scotland, as John Mayer and Ed Sheeran would continue to follow us the entire week, crooning from hidden speakers in the corner of multiple coffee shops and restaurants. I always get a kick out of seeing what is popularly used as atmospheric music (for example, Sweden had a preference for pop tunes straight off every Dawson’s Creek soundtrack from the mid-aughts). 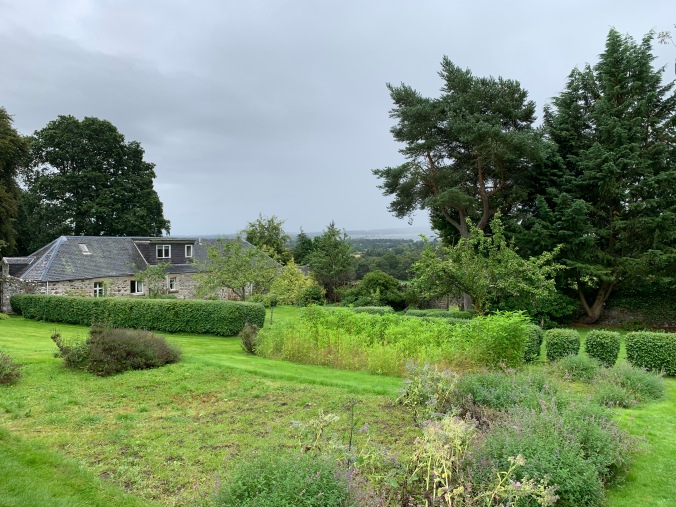 We stopped at a Tesco to pick up wine and snacks for our night of glamping (I can’t think of the popular UK grocery chain without hearing Lily Allen sing in my head “She was struggling with bags from Tesco”). Our glamping pod was located in the outskirts of Inverness, a round little hobbit house with a fire pit. The pod was an adorable decked out with a double bed, two bunk beds, and a shower that made me feel like I was in a transporter from Star Trek. It was a cool night, slightly misty, and we craved a little more exploration, so we embarked on a “wine hike” through a nearby park. The wooded path was lined with holly shrubs, and followed a winding little creek.

Back at the pod, we made a fire, had some more wine, and enjoyed the peace, quiet, and lack of John Mayer.