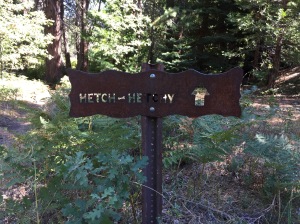 One of the great things about camping trips is that it’s easy to change your plans around, “Choose Your Own Adventure” style. After 4 days of hiking in the Hetch Hetchy area, Kurt and I decided to check out Yosemite Valley. It would be an hour-to-90-minute drive from where we left our car at the backpacker campground, so we woke up bright and early at 6:30 am to get an early start to the day. We had trail mix for breakfast instead of cooking a hot meal to make packing up easier. 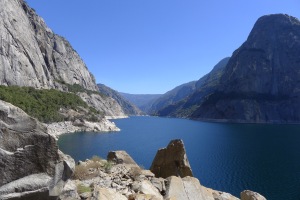 The trail back to the trailhead took us past Rancheria Falls, which was already dry for the season. Someday, it would be awesome to go back to Yosemite earlier in the year to see all of the big waterfalls gushing at full volume. The high season means more crowds and harder-to-get trailhead permits, so it’s always a toss-up when picking what time of year to travel. The last 5 miles of trail wrapped around the Hetch Hetchy Reservoir. Back at a lower altitude, we were quickly reminded how HOT it was outside. It was close to 90 degrees, and the sun was unrelenting on the unshaded trail. Once we were close enough to see O’Shaughnessy Dam, we became eager to finish. All I could think of was ice-cold Gatorade from the nearest gas station. We ran into a couple out on a day hike who was surprised to hear that we had been camping for the last 4 days, and offered to give us a beer from their cooler. We told them that since we were coming out of the backcountry, there was a 6-pack apiece with our names on them in the near future.

We got off the trail in the mid-afternoon, and drove straight down to the valley, stopping at a visitor’s center to inquire about a place to spend the night. All of the campgrounds in the valley were full, but we found a vacancy in the tent cabins in Curry Village. As we drove into valley, El Capitan suddenly appeared before us, with Half Dome looming in the distance. “It’s our screensaver in real life!” I saved. “It’s our whole Mac operating system in real life!” Kurt replied. We pulled over, joining the clusters of cars and tourists on the side of the road getting their first pictures in.

Upon checkin, we stuffed our food and bear cans into the bear vaults (a bit redundant, but we couldn’t bring the cans into our soft-sided tent) and ran straight for the showers. I attempted to hand-wash our nastiest clothes in the shower with me, which we hung dry on a rope strung across the top of our tent, pure camp-style.

Once we were feeling fresh and clean for the first time in days, we walked into Curry Village and ordered a giant pizza with beers, which we ate outside on the patio. There was a wi-fi lounge across the way with a wraparound porch full of rocking chairs, so we picked up a 6-pack of beers from the gift shop, grabbed some seats, and spent the rest of the evening Instagramming (me) and catching up on Packers news (Kurt). That night, we went to sleep in a real bed, listening to drunk tourists stumbling to their cabins instead of the hooting of owls. 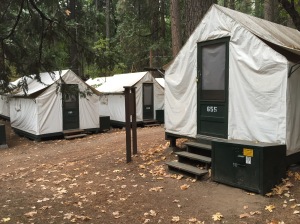