We ate breakfast in Curry Village. It was nice to be able to simply pick and choose food items for our trays, as opposed to the usual routine: filter water, start up the Jetboil, roll up the sleeping bags, take down the tent. On the other hand, the lodge was packed with people and voices, the opposite of the solitude of wilderness.

We had a few errands to attend to for the day: buy some new socks to replace the ones we had accidentally melted while drying them by the campfire, treat some blisters, mail back some extra food we wouldn’t need. But first, some sightseeing was in order; after all, that was why we came to the crowded valley. We hopped into the car and headed to Glacier Point, where you could get a 270-degree view of the entire valley. There were tons of people jockeying for spots along the railing, but once we got our turn, it was beyond breathtaking.

From one spot, we drank in views of Half Dome, El Capitan, North Dome, Basket Dome, the Royal Arches, Vernal Falls, Nevada Falls, Liberty Cap–the list goes on. After getting some good photos, we fell back to let other people in and went to the gift shop to get some caffeinated drinks (might as well enjoy the conveniences of civilization while we could). Nearby along a stone wall, a couple of backpackers had spread out their gear while cooking a meal in an alcohol stove. I looked at their array of dehydrated bags of food, wet socks drying in the sun, and folded-up trekking poles, then smiled in recognition. 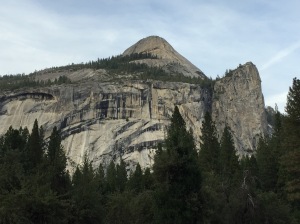 “What?!” I swerved to see whatever he had been pointing at. “Was it a deer?”

That about summed up the extent of our animal sightings for the day.

In the afternoon, we repacked our bear cans for the next leg of backcountry, boxed up extra meals to mail home from Yosemite’s post office, did a bit of souvenir shopping in the stores, and bought our new socks. For dinner, we had pizza a second night in a row , because you can do that while backpacking. We picked up a box of wine and retired to the wifi lounge to chill for the night. A table of 20-something guys sitting near us had climbed Half Dome that day, so we eavesdropped in on their conversation for a bit. We also chimed in on another couple’s argument over whether or not Fritos are great chips or the greatest chips (Kurt’s opinion: “They’re great for calorie density on the trail, AND they even work as firestarters!”).  The couple thanked us by giving us the rest of their bag of mac & cheese-flavored Lays. When we were finished with them, we handed them off to the Half Dome hikers. Just a bunch of drunk campers, continuously payin’ it forward.

One thought on “Yosemite Diaries: Tourists in the Valley”