After Amarillo, we break off from Route 66 and veer south. The Texas landscape is expansive, and our van zooms past wind farms and cattle ranches. At one point, we drive through a town called Bovina, where we see stockyards packed with cows. Finally, we reach New Mexico, the state we will travel around for the next 10 or 11 days. We pass through Portales and chuckle at their town sign “Home of 17,000 friendly people (and three or four old grouches).”

Our first stop is in Roswell. Everywhere we look, we see aliens. The street lamps have alien eyes painted on them. The McDonald’s has a big flying saucer in front. The Dunkin’ Donuts has a 22-foot-tall alien statue holding its store sign. I immediately love it. We walk around a bit, checking out the visitor center and a few souvenir stores, then buy admission to the International UFO Museum and Research Center, a.k.a. a big collection of rubber alien dummies, news clippings from the alleged crash in 1947, and interview videos with key witnesses. In our relationship, we often joke that I am the Mulder and Kurt is the Scully, so after watching the first few videos, I turn to Kurt and said “Well I’m convinced.” It’s exactly as kitschy as we expected and we take some fun photos and videos. The ‘live show’ with talking aliens, a fog machine, and light-up flying saucer are a highlight.

After Roswell, it’s time to find a campsite. We drive to Bottomless Lakes State Park and luck out with a perfect, private spot off the road in a primitive camping area. There’s pit toilets nearby, a metal roof for shade, and a grill–everything we need. After settling in, we take an easy mile-long hike along the trail to Lea Lake, which is not actually a lake but a cenote. At 90 feet deep, it’s the biggest and deepest cenote in the park, and local legend has it that items that get lost in the ‘bottomless’ lake eventually reappear underground in the Carlsbad Caverns. I am mildly obsessed with sea monsters–I have a Loch Ness monster tramp stamp, or as I like to call it, Triassic stamp–so deep bodies of water give me fun haunted-house-type thrills. (Again, I’m the Mulder). We go for a swim in the shallow beach area. The water is shockingly cold, especially given that the air temperature is pushing 90 degrees. Must be that whole bottomless factor.

Kurt in front of Lea Lake

Back at camp, Kurt grills us steaks for dinner. I walk around a bit, exploring the small canyon just beyond our site. 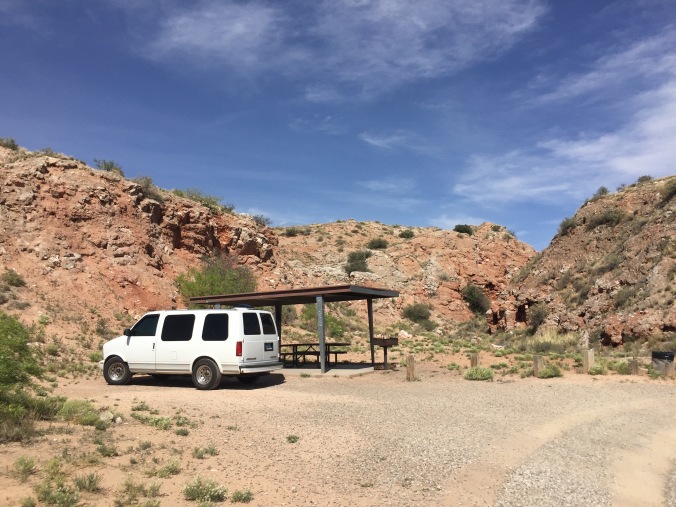 Desert camping is totally new to me, so my ears are perked for rattlesnakes. How does one spot a scorpion? Do I need to worry about it? Each time we camp out in a different type of landscape, I need to quell the anxieties that arise with a brand new environment. The sunset helps, though. It’s incredible, a blending of sherbet pink and creamsicle orange that melts into the sandy horizon.

It’s Sunday night, and the start of our trip coincides with the biggest pop culture weekend of the year: the opening of Avengers: Endgame and Game of Thrones’ Battle of Winterfell episode. I am usually all for putting away screens while camping, but I NEED to watch Game of Thrones on its airing night. Luckily, we get some cell reception in the state park, so we tether our iPad to our phone’s hotspot, then prop it up in front of the stunning backdrop that is our campsite while I pour us generous Cersei-sized cups of wine. It’s not an ideal way to watch the notoriously dark episode, and yet I love it. It reminds me of the first time I read A Storm of Swords, over eight years ago, while waiting out a summer thunderstorm in our small tent on a sandbar in the Wisconsin River. I huddled with my headlamp over a paperback as rains beat down on our nylon roof while Kurt made us a cheese plate and poured boxed wine, and it was one of my favorite camping moments ever. So to watch one of the last episodes ever while in Bottomless Lakes, with the real-life howl of coyotes and hooting owls contributing to the soundtrack, all feels like coming full circle for me.