It’s our 5-year wedding anniversary, and I’m so happy to be spending it on the road together. This road trip was an idea that formed nearly a year ago when I decided that I wanted to do something special for both my 40th birthday and our 5-year anniversary. And here we are now, on Route 66 for a few more days, taking our time along winding roads and stopping whenever we see something worth exploring. 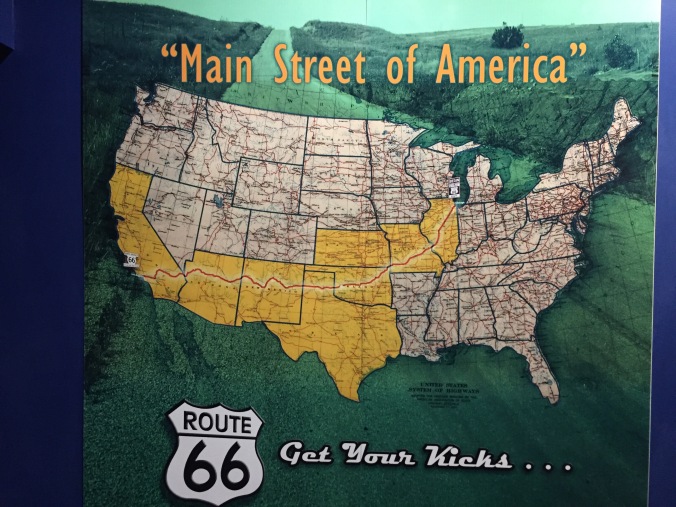 We kick off the day at a Route 66 museum, walking through various rooms dedicated to each decade since the “Mother Road” was built, and read about the people working to preserve its history and legacy. Afterwards, we spend a lot of the day driving on the historic road itself, past vintage gas stations and over wooden bridges.

Kurt is super into all of the road’s history, and keeps enthusiastically pointing out at any street sign that looks vintage or a building that’s been abandoned. At one point I tease him, “You don’t get this excited if you see an old Venture sign in the Chicagoland area.” I counter by putting the Oklahoma! soundtrack and belting out “Little Surrey with the Fringe on Top”, which Kurt ignores as he continues to point at stuff. I share this anecdote in case you’re wondering what 5 years of marriage looks like.

In Oklahoma City, we visit the National Memorial that honors the memory of the victims, survivors, and rescuers of the 1995 bombing of the Alfred P. Murrah Federal Building. It’s a solemn, beautiful monument. Two large black monoliths on either side of a long reflecting pool symbolize the minute before and the minute after the bomb exploded, taking 168 lives. Parts of the walls of the federal building still stand, enclosing the space. 168 stone chairs face the reflecting pool; the smaller chairs represent the children who were killed that day in the building’s daycare center. The other visitors around us move quietly, speaking in reverent whispers. I’m glad we stopped here to see this place; it’s one thing to remember an event but it’s a different experience to walk in the space where it happened and feel the gravity of it in person. 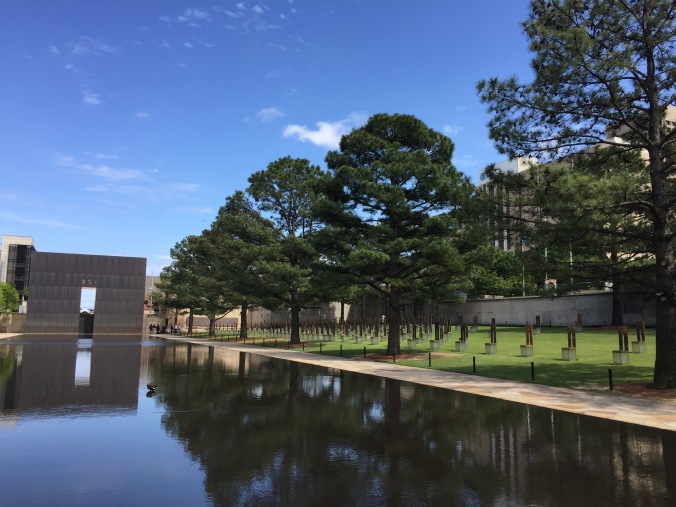 The rest of our day is less somber. Pops 66 is a gas station/diner with a gigantic metal sculpture shaped like a soda bottle out front, calling you with its  sugary siren song. The diner is shelf upon shelf of pops of all kinds, with an entire wall of fridges displaying brands and flavors I’ve never seen before. Also, talk about mixer heaven. 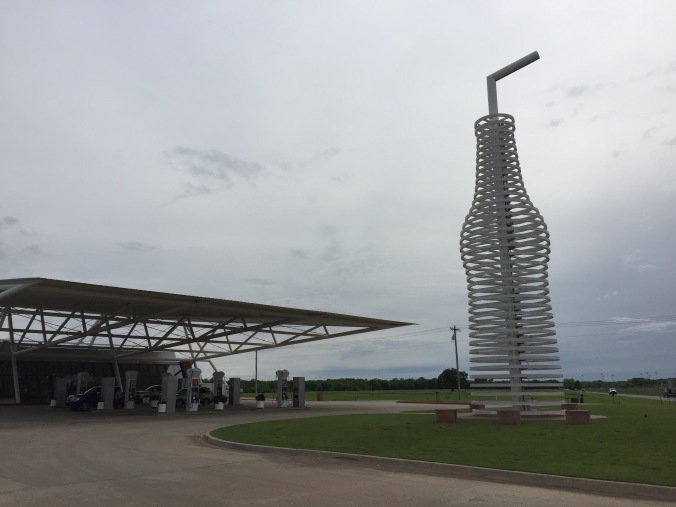 We’re enjoying taking our time so much that the late hour creeps up on us. Our goal is to reach Missouri tonight. It’s nearly 9 p.m. by the time we reach Galena, Kansas (a new state for me!), and thankfully, we find one restaurant still open, a Mexican place right off the main road. By the time we finish eating and drive the remaining 45 minutes to Carthage Missouri, it’s nearly 11 p.m. We check into another historic Route 66 motel, Boots Court. It has been restored to its vintage splendor, and as the owner tells me while she checks us in, Clark Gable stayed here multiple times. She is friendly and chatty, and we talk a bit about Chicago before she tells me of the multiple cities and countries she’s lived in. The night before, we had met a Tucumcari motel owner at the motel in Elk City, and we learn that all of the Route 66 motel owners know each other, all a part of a unique club of sorts. “We’re a linear community,” as she puts it. I can see that Route 66 calls to a certain type of person, an adventurous spirit with incurable wanderlust. I think I want to own a Route 66 themed motel someday.

Our room has wood floors and a bed covered with a white chenille bedspread; it’s so gorgeous that I’m almost taken aback that someone would trust strangers with it. There’s red plush pillows, and a vintage radio on the vanity is turned on, playing music from the 40’s. I truly feel like we stepped back in time and I’m waiting for Captain America to show up for a slow dance.

At this point it’s super late and it’s been a long day, so we fall asleep quickly. Two sleeps ’til home…