Soundtrack: “Movin’ Right Along,” The Muppets

Fueled up on caffeine from a local shop called Mother Road Coffee, we hit the road. I cue up the song “Movin’ Right Along” from the Muppet Movie. I’ve been quoting one of my favorite Fozzie lines during our trip, “A bear in his natural habitat: a Studebaker.” We stop at the World’s Largest Fork in Springfield, as well as a Steak ‘n Shake that is listed on the National Register of Historic Places.

We then try a classic tourist activity that I’ve never done before: an animal park safari. I have a lot of mixed feelings about private zoos and the sales of exotic animals. The first section of the wildlife park is exactly the kind of thing that bums me out: big mammals in cages. The tigers and lions on display look bored AF. A bobcat paces around its enclosure over and over. We move on to the  much more cheerful goats, which flock to the fence to greet us. After we finish the walking part of the tour, we get into the car to drive through the open range where animals run free, and this is where shit gets real.

With a bag of oat pellet treats between us in the front seat, we drive the van into the safari section of the park. It’s wild to me that places like this still exist, where you are trusted to drive through in your own vehicle and feed animals through your window. The animals in this free range part of the park are all either ungulates  or large birds, so there’s nothing that’s going to maul you, but it all feels a little surreal to me.

Immediately, a very outgoing wildebeest runs right up to my window and sticks his face through my open window, seeking treats. Saliva pours out of his mouth and pools onto my pants. I toss a few pellets out the window, and as soon as the wildebeest go after them, I roll my window up quickly. Kurt drives at a crawl along the road, and the view of the 350-acre park opens up in full display, dozens of llamas, donkeys, sheep, and goats all looking at us. A pack of alpacas crane their necks and walk towards the van in slow motion, and I feel like we’re in a really weird zombie movie. We watch the car in front of us get swarmed by zebras. Five ostriches prance by, fanning their fluffy wings. 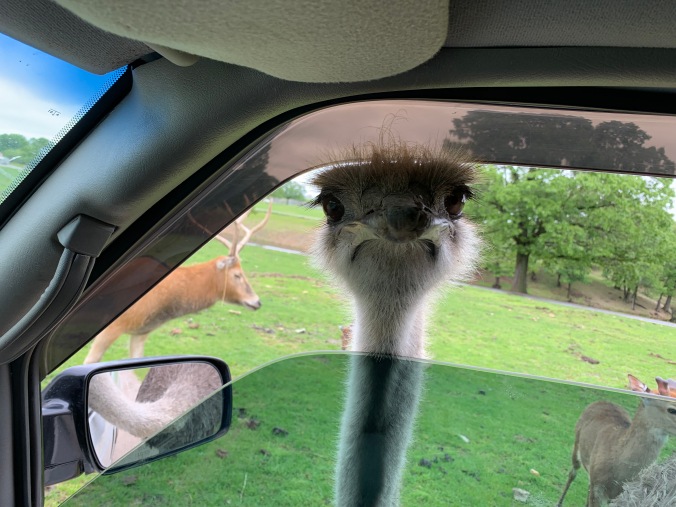 I get the hang of keeping the window mostly rolled up until I’m ready to pass out pellets to the next animal, preventing further drool fiascos. It takes us nearly two hours to drive through the whole thing. The grounds are expansive, and the animals are free to approach the road or roam away from visitors into the valleys or wooded areas. I feel a lot better seeing this part of the park where the animals obviously have plenty of room to wander about. I never would have guessed I’d pet a camel during this trip, and yet, here we are.

We have a surprisingly fun and hilarious time on the safari. It makes me wish that parks like this would focus on the free ranging herbivores and not include large exotic animals like big cats and black bears, who will never be happy in caged enclosures. But at the same time, I know that when private zoos close down and their animals get sold off, they can end up in potentially worse circumstances, so I guess I am glad that at least the big cats we saw appeared healthy and looked after.

On to the next stop, which happens to be, uh, Uranus. It’s a tourist stop along Route 66 which seems to exist for the sole reason to run rampant with cheeky puns (see what I did there). There’s a Fudge Factory and a Creamery. The town newspaper is called the Examiner, and they have an escape room called Escape Uranus. The whole thing is basically heaven for 12-year-old boys (though I will add that the photos of Uranus in my Instagram stories got the most laughing emoji reactions from my 40-something-year-old friends). 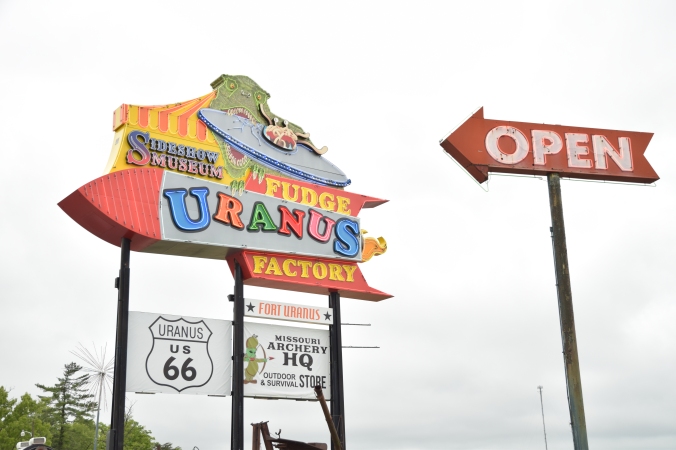 What is a Route 66 trip without a stop at the World’s Largest Rocking Chair? We jumped off the highway to take a quick photo, and I was charmed by the two feral cats sitting in the grass at the foot of the chair.

We pass through St. Louis, glimpsing the Arch, and cross the Mississippi River, back into Illinois. I look out my window through a splotch of dried bison saliva crusted onto the glass, and sigh. It’s a bittersweet mix of emotions–grateful to be almost home and reunited with our pets, but sad that our adventure is coming to a close. But first, we get to camp one more night. We reach Sangchris Lake State Park just outside of Springfield, find a campsite, and settle in. Apparently, Illinois has been getting drenched in rain while we were gone, and the ground is that kind of heavy mud that nearly sucks your boots off your feet. We make our last campfire of the trip, and drink the last few New Mexico beers from our cooler.

It rains steadily all night. I love the sound of light rain on the roof of the van. I love sleeping in the van and the smell of campfire clinging to my hair. I’ve loved this trip, bursting with new memories and experiences. We have about 2 and a half hours left of driving to go, but it’s just a flat, uneventful burn through farmland in the misty rain. 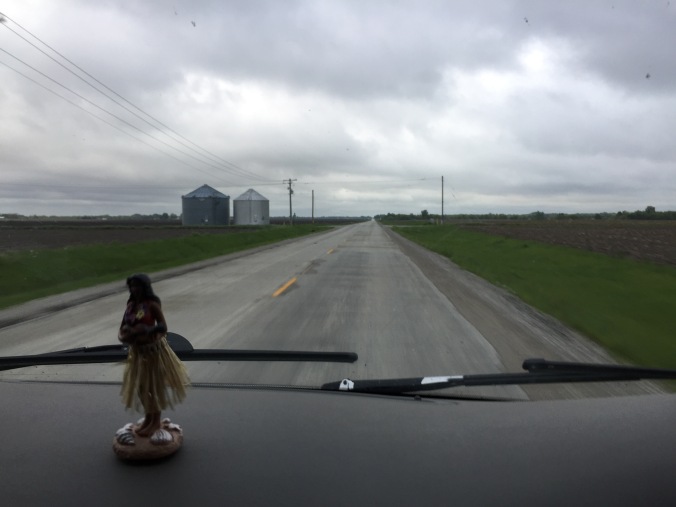 Eventually, the Chicago skyline appears ahead. I love this view from the south side of the city, the way that the skyscrapers loom above the overpasses, the pinwheels atop Comiskey Field, the merging of red tail lights across the wide expressway. We’re home.

Over two weeks, we’ve driven a total of 3,871 miles through six states. We started at the low elevation of 594 feet in Chicago, and reached a high of 10,300 feet atop Sandia Peak. The hottest days reached 91 degrees, and the coldest nights plummeted to 35 degrees. I turned 40, and our marriage turned 5. It’s nearly impossible to capture the all of the feelings I have in my heart, so instead, I put on the last song from our road trip playlist, and let Andrew Bird sing it out:

“I paint you a picture
Of Pulaski at night
Come back to Chicago
City of, city of light”