After this stretch of city stays, we’re going to be camping again. I shower in the Earthship, taking advantage of running water plus enjoying the experience of bathing next to a flower garden. Once we’re packed up, we get coffee to go and say goodbye to Taos, headed back towards the large national forest that surrounds Santa Fe.

Bandelier National Monument is our first stop. The canyons within the 33,000-acre park are an ancestral home of the Pueblo people. In 1150 to 1550 CE, people carved homes into the soft rock formations created from volcanic tuff, creating cliffside dwellings.

In the parking lot, we pack a daypack with snacks, water bottles, and jackets, then begin our day of hiking. The park trails take us right up to some ancient dwellings where we can climb wood ladders and explore cave-like spaces, their ceilings blackened with soot from campfires.

Once we finish the easy Main Loop Trail, we head deeper into Frijoles Canyon towards Alcove House. Set high in the mountain ridge, Alcove House is a sacred ancestral site where historians believe up to 25 Pueblo people lived at one time. I’ve seen photos of the steep trail leading to Alcove House, so I mentally prepare myself during the 2-mile walk to get there. Along the way, two signs warn us that the final .5 mile of trail is a 140 ft. vertical climb involving ladders, and those with health problems or a fear of heights should not attempt it. Awesome. 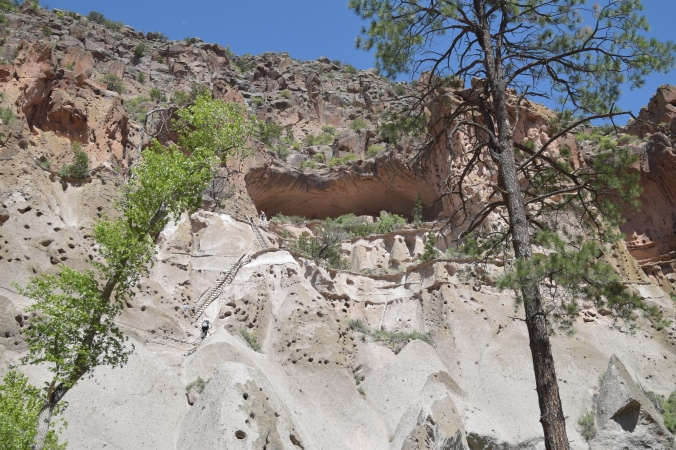 the 140′ vertical trail to Alcove House

When we reach the first ladder, I want to give it a shot. I can always turn around if it gets too scary. Kurt goes first, and I catch up to him on the initial rock landing. The trail is incredibly narrow, at points barely wider than one of my boots. At the base of the longest ladder of the trail, we reach a traffic jam as obviously, only one hiker can climb at a time. I stay on the rocky landing as a woman watches her 11-year-old daughter make her way down. The girl had gone all the way to the top, and after she climbs down, I tell her that she did an awesome job and she’s much braver than me. “Thanks!” she says, before adding “You can do it too!”

Kurt on the Alcove House Trail

Well now, I HAVE to climb all the way to the top because a kid believes in me. The next wooden ladder is about 30 feet tall, flat against the rock face, and there’s nothing but air to the right of it. I take a deep breath, then go up at a steady pace, focusing on the next rung up and not looking down or over the cliffside. As I near the top, I see Kurt above me taking photos. I grip the last metal handle in relief. There’s some trail, some stairs, and a few more short ladders, and the next thing I know, we’re at the top.

the view from inside Alcove House

The view is spectacular. For a few minutes, Kurt and I are alone in the Alcove House, so we are able to take photos free of any other hikers. An ancient kiva sits within the dwelling, and I try to imagine what it would be like to live all the way up here and look out at this beautiful view of the canyon first thing every morning. Eventually, more people make their way up, so Kurt and I begin our downward descent so that they can take their own photos. I have a feeling the return trip is going to be scarier, because you HAVE to look down as you go.

Focusing on my breath, I take it one step at a time. My heart is pounding, not just from nerves but also from the high altitude, which always affects my dumb sea level-accustomed lungs. Slowly, the forest floor gets closer and closer, and my boots land on earth with a final thud. 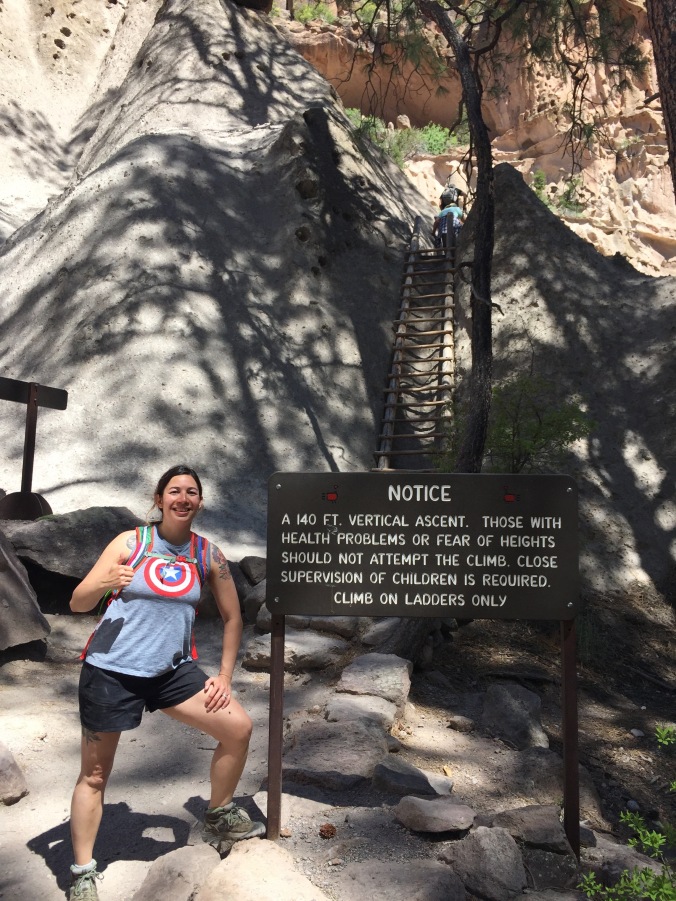 We rest on a bench, eating our snacks and watching hikers move up and down the trail above us. The trail back to the visitors center is an easy stroll through the forest, and I spot a young elk resting beneath a Ponderosa pine. We take photos from a safe distance. When we pass an elderly woman holding binoculars, Kurt tells her about the elk, and she replies “Oh I’m from Idaho, elk are a dime a dozen to me!” I guess us Illinoisans are easily impressed.

As it gets later in the day, the temperature feels cooler. I pull my fleece jacket on over my tank top. We drive towards Santa Fe National Forest. While stopping for gas in Los Alamos, we take a weird exit off the main road and accidentally get into a lane that takes us up to the security gate for some large sprawling building complex, so we do a quick u-turn. Oops, we almost tried to enter the Los Alamos National Laboratory. Awkward.

In the national forest, we use a forestry map to find a stretch of roads designated for dispersed camping. There’s a good spot on the ridge, set in a bit from the dramatic cliff (I’ve had my fill of heights for today). I’m happy to be outside again after 5 straight nights in towns and Airbnbs. The fresh air smells so good. Also, at 8,300 feet, this is the highest elevation we’ve ever camped at. A cold drizzle starts to fall, so Kurt gets out the grill to finish cooking dinner–bratwurst and chopped veggies.

I add more layers as the cold sets in.  The rain turns into snow. This puts me strangely at ease. Camping high on a mountain range is unfamiliar territory to me, but camping in the middle of a random snowfall is just like home.